The FatemiDawat website (Q&A section) tries to justify the announcement of Nass by Khuzaima on the 17th/18th of January 2014:

“Why did Qutbuddin Maula TUS wait until now to disclose that he is the true mansoos and not two years ago?

Qutbuddin Mawla obeyed the farmaan of Syedna Burhanuddin RA and kept his nass private/khangi.  Two years ago, when Shehzada Qaid Johar bhaisaheb announced that nass was conferred on Shehzada Mufaddal bhaisaheb, Qutbuddin Maula maintained his charge of secrecy and patiently waited for Syedna’s return from London to speak in private. Then it became known that Syedna has suffered a debilitating stroke impairing his speech and awareness. With sabr and fortitude, Qutbuddin mawla kept obeying the farmaan to keep his nass secret with the hope that Syedna Burhanuddin would recover from the stroke and correct the falsehood done during his illness”

Do the words “disclose now” refer to 18th January 2014, the day the website was launched? (https://web.archive.org/web/*/http://fatemidawat.com)

These are all rhetorical questions.

Everyone knows “why” Khuzaima did what he did. He did what any sly, power hungry man would. He planned well in advance for 50 years, until the right time arrived. That day was the 17th of January 2014, when mumineen “lost” their Moula who was their life, and Khuzaima “found” the chance of a lifetime.

To confirm that Khuzaima did intend to make this announcement after the the demise of Syedna al Muqaddas, the FateliDawat website updated their statement on 30/01/2014 saying:

This has been answered above.

The former Cheif Justice AM Ahmadi supports Khuzaimas false claim. Quoting from the article, this is what he has to say:

Ahmadi, a Dawoodi Bohra who was the chief justice of the Supreme Court between 1994 and 1997, wrote to Qutbuddin’s family, even before the late Syedna’s demise this month, expressing his opinion and support, he told HT over the phone. The former chief justice resides in Delhi and is currently in Ahmedabad.

“Syedna Qutbuddin’s family had shared certain historical documents with me, some of which are written in Arabic, in which historical facts about the community and the events since the nass (choosing the successor) conferred by Syedna Burhanuddin on Syedna Qutbuddin in 1965 have been recorded. I examined the documents and believe that Syedna Qutbuddin’s stand of the 53rd Dai is principled,” said Ahmadi.

There is an obvious contradiction. If Khuzaima claims this Nass was done without any witnesses and no one else knew. How did Mukasir Saheb Saleh Bhai Saheb know about this?

Khuzaima has made it clear that the “Amanat of Nass” was to be revealed AFTER the demise of Syedna Burhanuddin RA, then the arguments posted above are sufficient to prove that this is a blatant lie. He has technically done khiyanat of the amanat. The fitnat was planned well in advance.

More proof that Khuzaima did not keep the Amanat of this alleged Nass. He informed his children and grand children many years in advance. Thus, his claims to have revealed it after Syedna Burhanuddins nass is completely false.

This video sheds light on the subject:

Khuzaima in his latest video updated today continues to say this Amanat of Nass was supposed to be kept secret, but the above mentioned evidence proves that he didn’t keep it so. 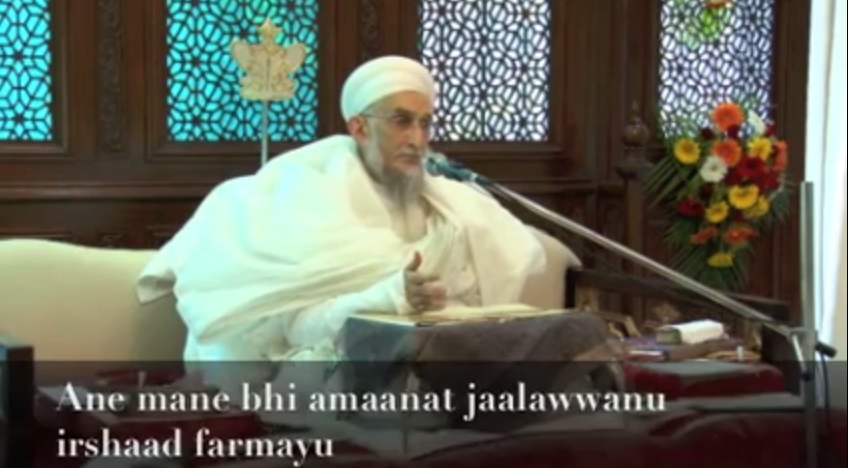