Having a majority is not in itself proof of Haqq. There is no disputing this position. However, for the leader of either a majority or a minority, the standing of his companions, the quality of his supporters, is a reflection upon himself. It could be said that, in part, the merit of your associates is comment on your own character and vision.

Hudaat Kiraam RA have always been surrounded by their noble disciples and followers, even if they were few in number.  History has noted that though Ameerul Muminen Moulana Ali SA had few devoted supporters of his cause after the demise of Rasoolullah SA, they were publicly known to be of righteous character and elevated status. They had served Rasoolullah SA with diligence and sacrifice, especially in the early battles of Islam. This is especially apparent in the time of Ameerul Mumineen’s khilafat when he received the support of most muhajereen and badreyeen (those who fought in the battle of Badr). On the other hand, his opponent from Banu Omaaya was surrounded by a contingent of Rasoolullah’s pardoned prisoners of war, the remainder of his opponent s from the battle of Ahzaab (Khandaq) and mercenaries. This very observation was made by Aqeel bin Moulana Abi Talib SA and annoyed the Omayyad no small measure when he visited his court in Syria.

“Aqeel laughed aloud in his court. When questioned about why he burst out laughing, Aqeel replied that when I witness the majlis of Ali, I see him surrounded by Muhajereen and Ansaar. Whereas I see this court filled only by freed prisoners of war and the remnants of Rasoolullah’s opponents”

Over the course of Dawat in Satr, each Dai Mutlaq has been endowed by, at the least, a few notablehudood kiraam (dignitaries of Dawat). They served their Dai and Mumineen with distinction and excelled in the acquisition and dissemination of Ilm Aale Mohammed SA. Following their example, individuals in different strata of Mumineen also performed exemplary service.

There has been a vast spectrum of learned hudood over the course of the last half century. Who amongst them has supported Khuzaima in his claim? Yes, Haqq is not ascertained by numbers but one cannot help but question that who amongst the learned in all the various institutions of Dawat has acknowledged his leadership. It seems strange that ALL such learned men and women knowingly submitted to or supported Baatil according to Khuzaima’s claims. Who are his notable dignitaries of standing? The majlisof Dai al-Zaman Syedna Mufaddal Saifuddin TUS bears witness to Hudood Kiraam, Qasr Aali, Bayte Zainee, Kothar Mubarak, Asateza, Ummaal, Moallemeeen, Mazaaraat Khidmat guzars, talabat of Jamea and learned and perceptive Mumineen Mukhliseen. According to Khuzaima, they all have failed in identifying Haqq. In discrediting all these groups, he is claiming that the efforts of Syedna Taher Saifuddin RA and Syedna Mohammed Burhanuddin RA were wasted. They tirelessly cultivated these Dawat resources even though all of them would eventually follow the path of falsehood? Repeated testimonies from the Imami takht regarding their khidmat amount to nothing? Today, not even one Dawat khidmat guzar is named in his retinue. Even those that were gradually left him one by one. I wonder why this so. 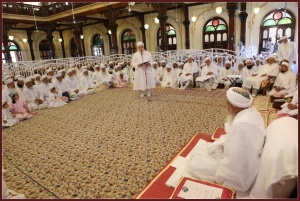 Khuzaimas majlis “hudood” comprises of 3 of his own children, whom didn’t have the good fortune to be born in Syedna Taher Saifuddins RA era, nor had the tawfeeq to attend Syedna Mohammed Burhanuddins RA waaz regularly, nor attended Al Jamea tus Saifiyah. 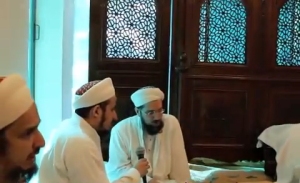 Yes, one is definitely left perplexed. If quantity is not a measure of Haqq, what of quality?