Shaikh Ebrahim Yamani is one of the witnesses/shahids listed on the letter. All through his life, his words and actions show his knowledge of Syedna Burhanuddin’s nass on Syedna Qutbuddin, not on someone else. Both before 1388 and after, he gave extra reverence to Syedna Qutbuddin, even expressing to him his anticipation of Syedna Qutbuddin’s Dai-ship. Why would he do so if he had secret knowledge of a different nass? Moreover, he wrote many publicly recited madehs for Syedna Qutbuddin, in one of which he says, for e.g., “tamay dawat ni raha na qutub chho” normally said only of the Dai.

Since Khuzaima is trying to justify his false claim about Miyasaheb Shk Ibrahim Yamanis madeh in his praise, it seems only fitting to post a madeh by the same author, in which he refers to the eminence of Syedna Mufaddal Saifuddin TUS during the Kodaikanal trip of 1393H (approximately five years after Miyasaheb was informed about the nass). 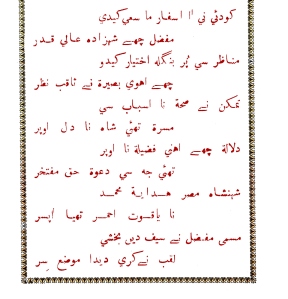 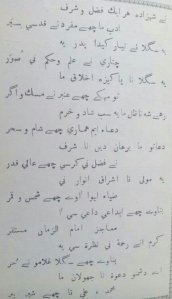 Miyasaheb speaks of the endeavours of Syedna Mufaddal SaifuddinTUS during this trip and refers to his ‘baseerat’ and his discerning vision (2nd verse). His khidmat is evidence of his ‘fazilat’ which is a source of pride for Dawat ul Haq (4th verse). He describes Syedna Mohammed BurhanuddinRA as the king of Misr and its red ruby “yaqut e ahmar” as his son (5th verse). The expression ‘red ruby’ is synonymous with the maqam of Mansoos, as evidenced by Syedna Taher Saifuddin’s RA bayaan mubarak. He spoke of the challenges of facing rebellion and dissent within Dawat, but despite these trials, Allah enabled him to prepare his son and Mansoos ‘Mohammed’;

There are numerous instances where Duat have been referred to as Yaqoote Ahmar. Syedna Tayyib ZainuddinRA has been referred to as the red ruby from the progeny of Syedi Hassanji BadshahQA, as well as Syedna Noor Mohammed NuruddinRA as the yaqoote ahmer from the family of Moulaya RajQA (Hadiqat ul Tarikh 1369H). Hence, Miysaheb Yamani’s description of Syedna Mufaddal Saifuddin TUS is a evident hint to the position he was destined to inherit.

Furthermore, he indicates that Syedna Mufaddal Saifuddin’s TUS laqab mubarak (Saifuddin) is by design and holds a hidden meaning within (6th verse). This meaning has become clear since the revelation of the 1388H nass as recorded by the aforementioned author in which Syedna Mohammed BurhanuddinRA distinctly divulged to the three witnesses that he had given the title of ‘Saifuddin’ to his mansoos, in remembrance of his father Syedna Taher SaifuddinRA.

Miyasaheb Yamani also describes him as ‘mufrad’, which means ‘unique’ (7th verse). More specifically, it means unique without any parallel. In other words, he is unique in that he had the distinct privilege of being Mansoos with no other parallel.

He then goes onto praise Syedna Mohammed BurhanuddinRA and refers to his throne of ‘fazal’ and ‘sharaf’ as ‘aali qadr’ amongst the Duat (11th verse). The immediate meaning is that this chair of fazal and sharaf is of a majestic significance. However, a closer inspection of the verse reveals the double meaning intended for the discerning reader. Mufaddal is a derivative of fazal and ‘aali qadr’ is also the name bestowed upon Syedna Mufaddal Saifuddin TUS by his grandfather.

Syedna Aali Qadr Mufaddal SaifuddinTUS would one day inherit the throne of Dawat and Duat and by doing so, his future ascension to this office would be testimony to the shaan of his predecessor Syedna Mohammed Burhanuddin.

However, Khuzaima’s claim to the rutba of Dai cannot be based on the madeh of Miyasaheb Shk Ibrahim Yamani. He claims that verses intended for him were composed after 1388H and therefore the 1388H nass did not occur, as Miyasaheb Yamani would not have praised Khuzaima in the way that he did. This argument presupposes that these verses for Khuzaima somehow indicate that he was mansoos. By any logic, this is a fallacious argument.

Shaikh Ebrahim Yamani is one of the witnesses/shahids listed on the letter. All through his life, his words and actions show his knowledge of Syedna Burhanuddin’s nass on Syedna Qutbuddin, not on someone else. Both before 1388 and after, he gave extra reverence to Syedna Qutbuddin, even expressing to him his anticipation of Syedna Qutbuddin’s Dai-ship. Why would he do so if he had secret knowledge of a different nass? Moreover, he wrote many publicly recited madehs for Syedna Qutbuddin, in one of which he says, for e.g., “tamay dawat ni raha [millstone] na Qutub[pivot] chho” normally said only of the Dai. (From the website)

On the contrary, Syedna Taher Saifuddin RA refers to Syedna Qutbuddin Shaheed RA, as “the pivot of all pivots” (in his marsiyah shareefah Ya Qutba Deenillahe). This indicates that there were positions and individuals within Dawat who did have pivotal roles to play. However, it is the Dai who is the pivot of all pivots, around whose existence all of Dawat revolves. This verse therefore does not mean Miyasaheb Yamani afforded ‘extra reverence’ to Khuzaima. If he did, it was by virtue of the office he was assigned to by Dai al-Zaman. It is merely a literary extrapolation of his laqab (Qutbuddin) – quite distinct from the ‘hidden meaning’ inherent in Syedna Mufaddal Saifuddin’s laqab shareef. This one line of verse does not and cannot equate to nass.

Khuzaima also claims that the ‘supposed Nass’ on him was done in secret (Nass e Khafi), how then would Sh Ibrahim Yamani know of this alleged Nass to mention it in his literature? In actual fact, if he is insistent that Miyasaheb Yamani intended something other than what is apparent in praising Khuzaima, then he should offer far greater weight and importance to what Miyasaheb has recorded in his own hand regarding the nass of 1388H. It is hypocritical to give preference and weight to one work of an author and completely dismiss his clear documentation of a very significant event as a forgery. One can’t pick and choose facts.