On the fatemidavat.com website Khuzaima Qutbuddin and his children allege:

“Syedna Burhanuddin: “my beloved son”—Prefacing Syedna Qutbuddin’s name, Syedna Burhanuddin said three times over, “my beloved son.” The term “son” has great significance in the Dawoodi Bohra Fatimi-Tayyibi theology, for it denotes the relationship between a Dai and his successor; in the same way as a father produces and raises his son to take his place in this world, so the Dai prepares his successor to take his place in the world of religion. The kitab the second Dai Syedna Ibrahim wrote for his successor is named ‘kanzul walad’ (A son’s [walad] treasure). Why else would Syedna Burhanuddin call his brother his son, and that too three times?”

In the claim above and in other instances, the Fatemi Davat website writers have repeatedly tried to portray that the bestowal of titles, honorifics and endearments on Khuzaima equate to nass being conferred on him. Such bestowals are not proof of such designation: only an attested nass with witnesses is. When nass is conferred, they may embellish the stature of the mansoos, as they would of any person receiving them. However, on their own they are not evidence of nass.

The Case of the Honorific: Al-Walad al-Ahab (The Beloved Son)

The Dai al-Zamaan is the spiritual father and mother of all Mumineen. Many a time we have heard Syedna Mohammed Burhanuddin RA refer to himself as our baawaa shafeeq. The term Waalid al-Jamee‘ (Father of All) was used to refer to Syedna Burhanuddin in speech and writing by all shahzadas, brothers and sons alike. In turn, he saw us as his spiritual children and has many times addressed us as such. His address of “Ae mara pyara pyara farzando” still resonates in our ears. It is therefore no surprise that the term al-Walad al-Ahab ‘beloved son’ be utilised by Doat Mutlaqeen RA to convey their affection for their prominent followers, especially those that hail from their own or previous royal houses. The Dai in their case is not only their spiritual father but also their pater familias (head of the household).

Syedna Mohammed Burhanuddin RA has addressed many amongst his Qasr Aali (Royal Family) and Bait Zainee as al-Walad al-Ahab. It was an expression of his affection and regard for the addressee, and was often used to refer to the individual in public, especially when he was the Amil Saheb of the city that Syedna was bidding farewell to, or during the course of a bayaan or wa’az. A number of sahebo are alive today who were the recipients of this honour rendered verbally. Those that have received it in writing via official correspondence are far more. It has been used for Syedna Burhanuddin’s brothers, shahzadahs, grandchildren, nephews and even more distant relations.

Their website makes much out of it being used for Khuzaima but it must be noted that he was born 26 years after Syedna Burhanuddin. Syedna was 53 when Khuzaima was appointed Mazoon at the age of 27. The address of al-Walad al-Ahab is testimony to Syedna’s affection for his much younger brother, treating him as a son, rather than just as a brother. There is much ado about the repetition of the honorific three times over. There could be a number of reasons for this repetition. Perhaps it was in deference to the rutba of Mazoon being conferred, or as a public display of affection. We can no way claim to know the reason with certainty, but neither can they. What is known with certainty is that if it was repeated even 30 times over it does not equal to conferment of nass.

Instead of alluding to the son having reached the standing of his father, as the website purports, the title al-Walad al-Ahab reminds the humble of the contrary; about the gap between the father and his son. The father or spiritual father in this case who is at the pinnacle of spiritual maturity and wishes that all under him continue to ascend towards the peak that he stands on. This meaning resonates with a narration from the epistles of Ikhwan al-Safa.

The narrative shows us that on the contrary, the most beloved amongst children are ones furthest from maturity or optimum circumstances. Khuzaima is not the first in history that has mistaken a display of love and concern for declaration of superiority or preference over peers. His argument mirrors one made by Zaid bin Imam Ali Zainulabedeen.

Zaid claimed that he was authorised to take up arms against the Omayyad Caliph, even when his noble brother Imam Mohammed al-Baqir warned him against doing so. When Zaid was questioned about why he did not heed the authority of his Imam, he feigned ignorance of the Imamate of Imam Baqir stating: “I find it hard to believe that my father would cool piping hot marrow before feeding it to me, but would not spare me from the heat of hell fire, which is what I would face if I would disobey the Imam of my time”. His questioner replied that there is historical precedence for this occurring because both Yaqub and Yousuf Nabi did not disclose the superiority of Yusuf Nabi over his siblings in fear of their jealousy for him leading to animosity. There is no denying though that Yaqub Nabi loved all his children and Yusuf Nabi his brothers.

Furthermore, their text misleadingly plays on the words of this honorific as if it alludes to the illustrious book: Kanz al-Walad (The Son’s Treasure), and hints at Khuzaima being the recipient of its associated privilege. It is only a mansoos’s privilege to be privy to the secrets of this book, taught to him by his predecessor. However, does it seem appropriate that allusions to standings and privileges associated with this lofty book would be conveyed with the use of an honorific that is common to many in Syedna’s greater household? Reference to its privileges would not be expressed with an honorific, so commonly shared. A reference to it would be conveyed delicately and elegantly, reflecting the elegance and exclusivity of the book itself, befitting the privilege of the Dai’s Mansoos, Syedna Mufaddal Saifuddin TUS. Syedna Mohammed Burhanuddin states in his eid qaseedah shareefah 1432 H. (the year in which nass was publicly declared) 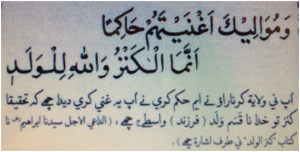 You have bestowed a bounty upon Mumineen by unequivocally declaring that the Kanz (Treasure) is indeed for the Walad (Son), and no other.

Therefore, it is obvious that love and endearment alone displayed by haq na sahib for anyone among his kin is not equal to appointment in rutba or superiority over others or preference. This was true then and it is true now. It is true for every title, honorific and endearment accorded to Khuzaima by Syedna Taher Saifuddin RA, Syedna Mohammed Burhanuddin RA and Syedna Mufaddal Saifuddin TUS. If he had stayed true to them, to the love, trust and responsibility they endowed him with, he would have merited the respect that such titles, honorifics and endearments accorded to him. Instead, in overreaching his bounds he has lost the virtue of all previous privileges.

It is my most sincerest wish and hope that the youngest and most ‘beloved’ son mature, be cured, and return.