I would like to point out at the outset that I do not intend to judge the sincerity and loyalty of any Dawat hudud, let alone a Mazoon. However, the words and actions of Duat Mutlaqeen lead us to understand that not all Mawaazeen possess the same set of attributes and qualities. I would like to remind readers that the exercise here is not to determine the individual standing of various hudood kiraam SA. It is to merely highlight that these hudood kiram, despite their holding a similar rank of Dawat, have been accorded different reverence and honour posthumously, thereby signifying that while the post may be the same, the stature of the incumbent may vary.

‘But it is not necessary that every mazoon should become a dai.’

The Fatemi Dawat website has repeatedly argued that we should believe Khuzaima solely because he was a mazoon for 50 years. They substantiate this claim by quoting a number of Dawat texts that highlight the important role and characteristics of a mazoon. However, what their argument does not account for is the fact that all mawaazeen (pl. of mazoon) are NOT of equal standing. They may all endeavour to imbibe the noble characteristics and qualities expected of a mazoon, but they all meet with varying degrees of success. These attributes are ideals to which the fallible, including the mazoon, aspire to, but ascent to the post of mazoon does not guarantee their acquisition in part or in entirety.

Firstly, the above words of Syedna Mohammed Burhanuddin RA make it clear that not every individual appointed to the post of mazoon possesses all the attributes of a Dai as outlined by Dawat texts. If they did, then it would have always been a foregone conclusion that whoever was appointed mazoon was also the mansoos, since there would be no one in the entire Dawat more suitable than him.

All of these mawaazeen were mountains of faith and conviction, purer than the purest of gold in their ikhlaas and sincerity and unwavering in their dedication to the khidmat of their Dai Mutlaq. Yet they were not appointed mansoos. This indicates that being appointed mazoon does not determine that a mazoon is destined to become a Dai.

It also should be pointed out that Syedi Shaikhadam Safiyuddin was mazoon for more than 56 years, and in fact Khuzaima is not the longest serving mazoon. Such blanket statements are propagated by their website and through their use of social media, but many such statements stand incorrect. Aziz Qutbuddin in his recent press conference has stated that he  estimates that 95 percent of the Doat were in the position of mazoon before they went on to become Dai; to be more ‘conservative’ he then retracts his statement and says 90 percent. A true conservative estimate is as follows: Approximately of the 53  incumbents to the office of Dai al-Mutlaq, approximately 27 were previously in the position of mazoon; nearly half WERE NOT. Apparently, Aziz is not as conservative as he needs to be.  Yet another example of the blatant lies and fabrications of the KQ clan. 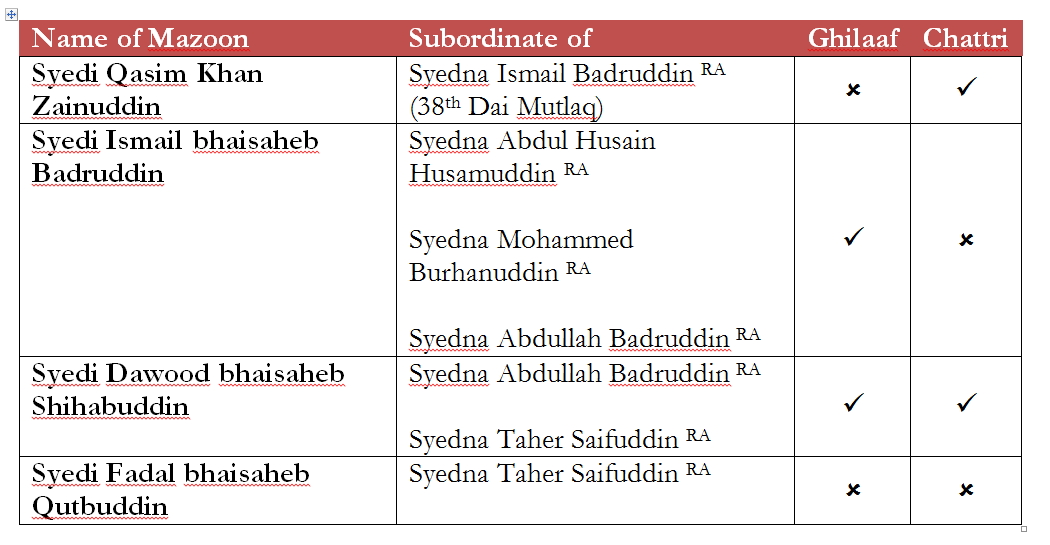 This veneration is also seen in the name plates placed upon their respective quboor: 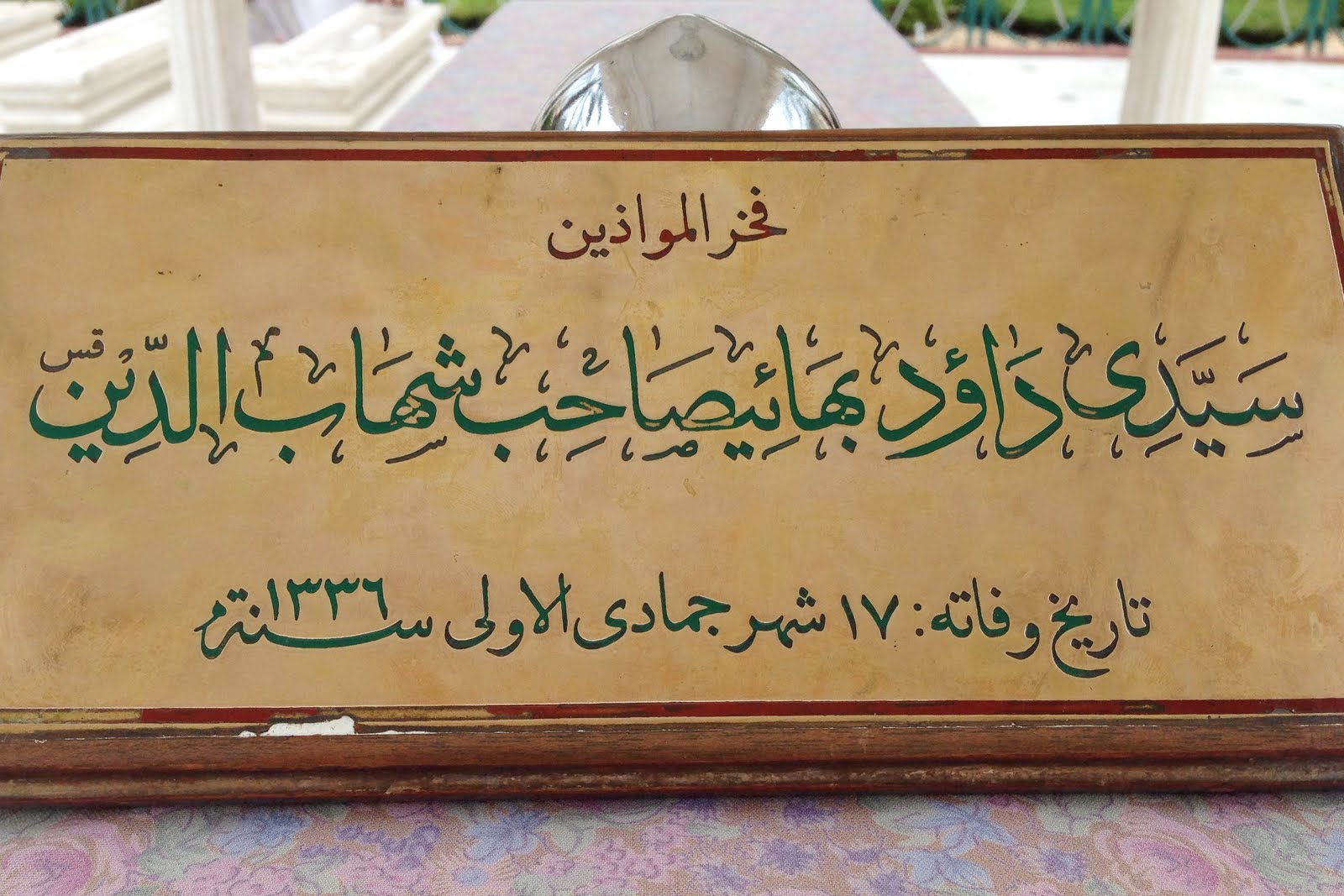 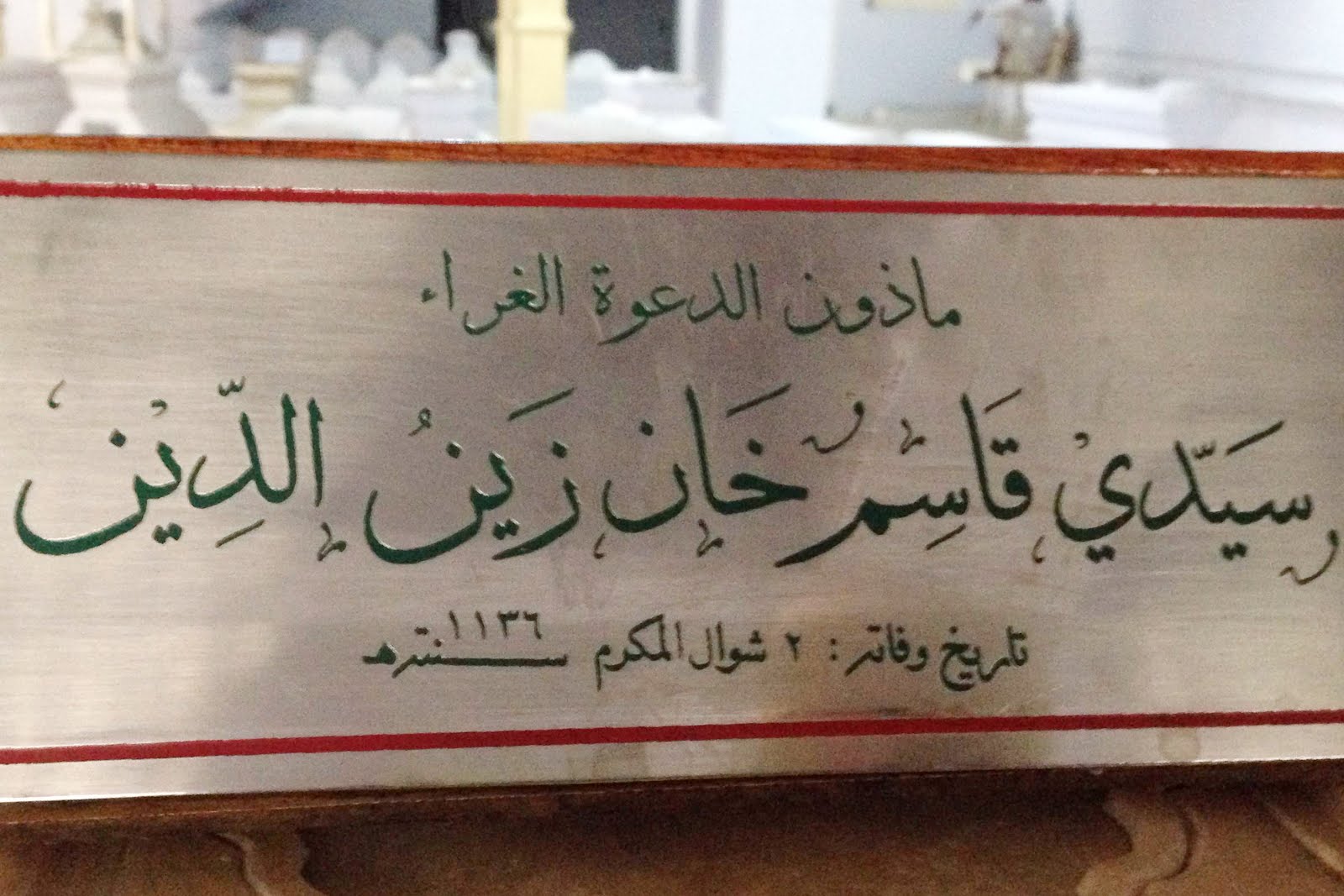 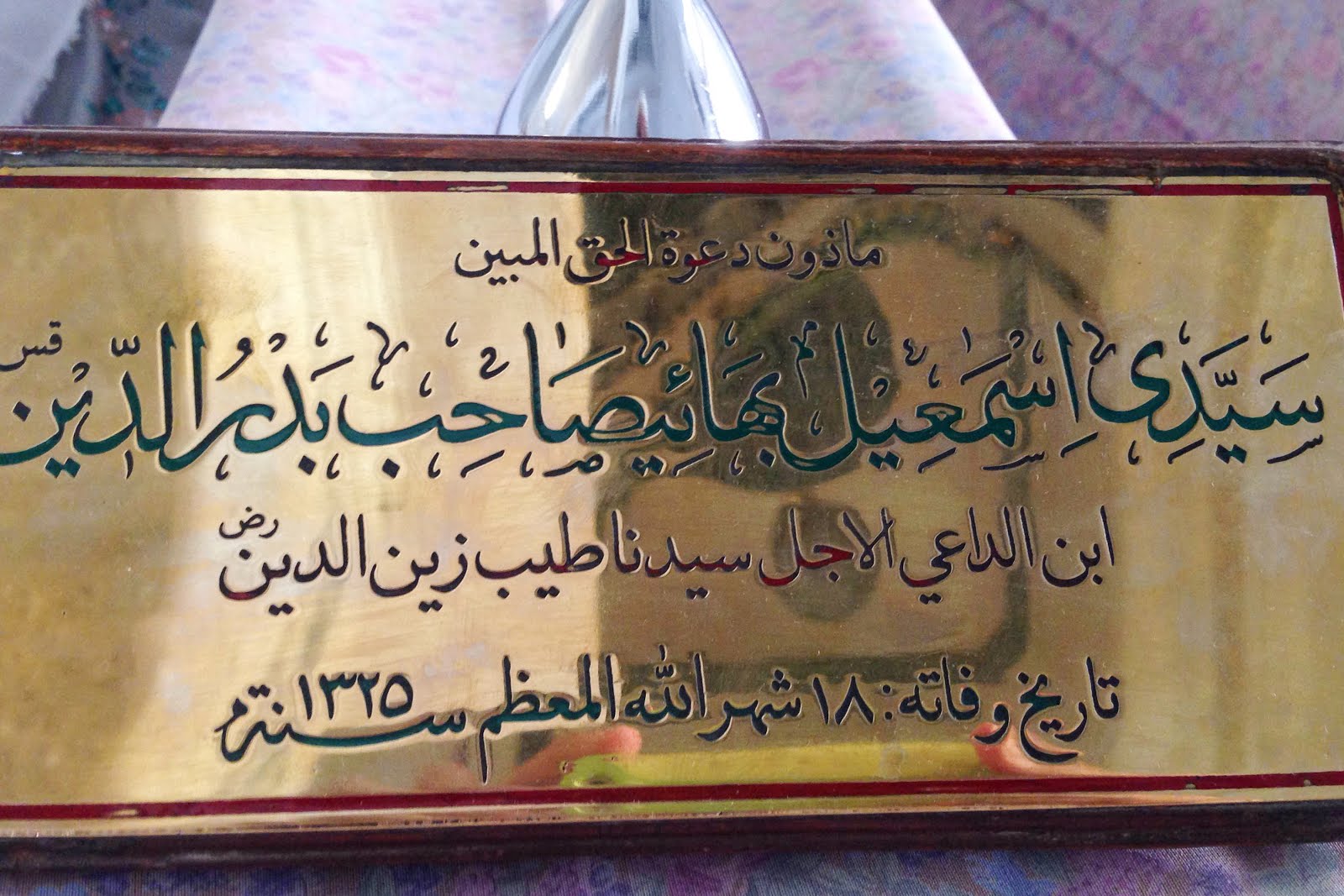 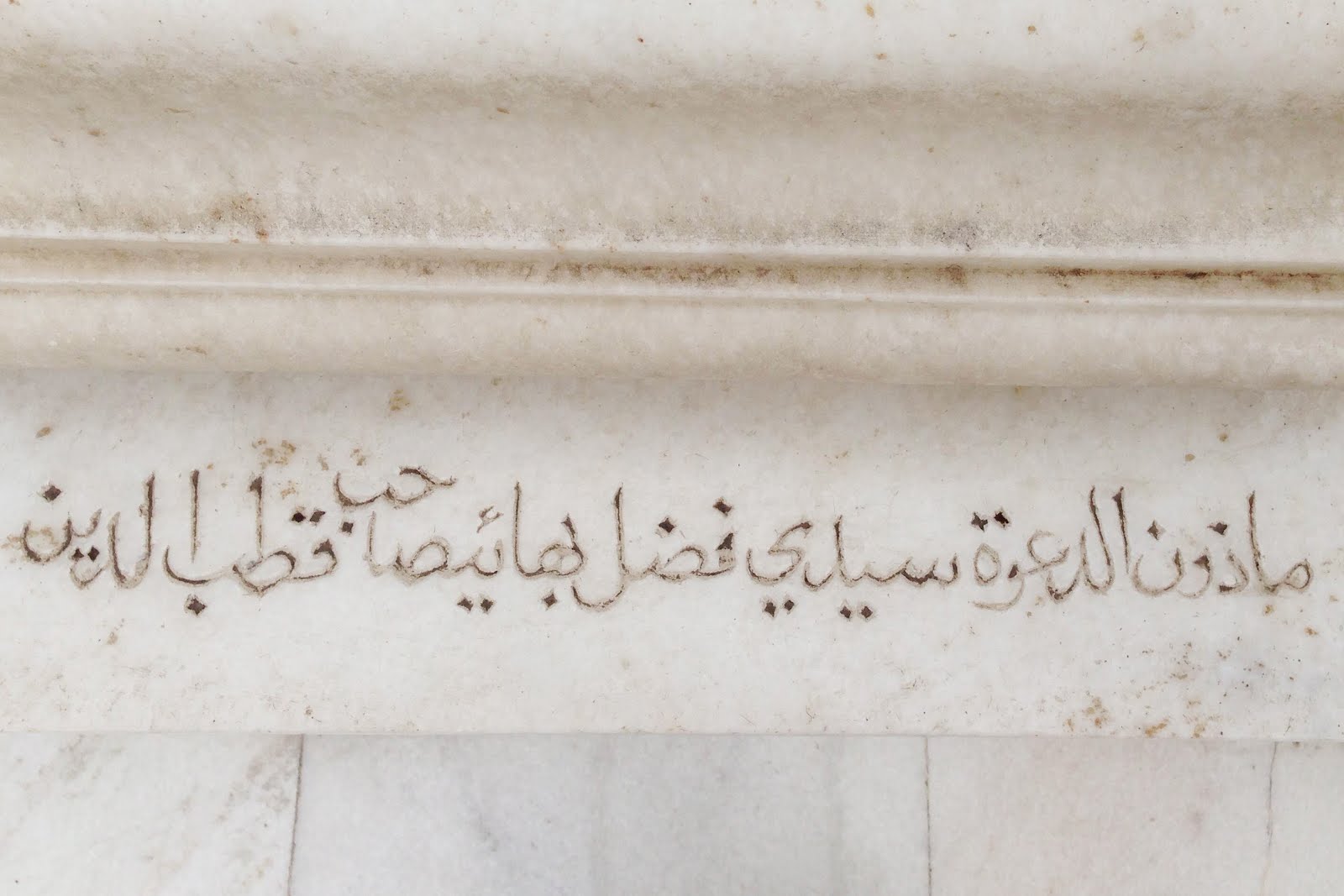 Thirdly, every morning after fajar namaz Mumineen recite Fateha al-Hudud which lists the names of mawaazeen, mukaasereen, mashaikh kiraam and hudud ´izaam. However, not all the names of mawaazeen are mentioned in it. Further, the duaa’ features the names of certain mukaasereen as well as select hudud kiraam who were neither appointed as mazoon nor mukaasir. If all the mawazeen were equal in their shaan then why would the hafti prepared by the instructions of Syedna Taher Saifuddin RA instruct us to recite the names of certain mawazeen, along with  various mukasereen and hudud kiraam, and not all?  Why are the names of those who have neither been appointed as mazoon or mukaasir mentioned? The Dai’s ´amal indicates that certain hudood have fadl and stature over others.

The above three points prove that not all mawaazeen are equal, they all do not possess the same set of qualities and attributes. Therefore, accepting the word of a claimant just because he was a mazoon is a misleading premise, especially a mazoon who succumed to the folly of believing himself to be the mansoos, just by virtue of being appointed mazoon. In the past even if the mansoos was in the position of a mazoon, Duat Mutlaqeen always adhered to the inviolable tenet of tawqeef,-making it known to a third person,when conferring nass upon their mansoos.