Mawaazeen (pl. of Mazoon) Kiraam AQ have rendered devoted khidmat to Doat Mutlaqeen RA, and it is no surprise that history, in general, testifies that they have served their Dai and his Dawat with sincerity and distinction. It is surprising, though, when the opposite happens when someone blessed with the high post of Mazoon does not display the expected reverence and service required for his Dai and Dawat. Khuzaima Qutbuddin has provided many examples of such deficiency in service, leading to one especially grave instance when his Dai and Moula, Syedna Mohammed Burhanuddin RA, was forced to gently show him the error in his ways. (bayan mubarak, Nairobi 1409, see following posts). Therefore, when Husain Qutbuddin cites examples of Mawaazeen Kiraam rendering illustrious khidmat to their Doat and their Dawat, with intent to support his father’s claim, these very examples in fact go against his in demonstrating that Khuzaima Qutbuddin in his half decade of incumbency has not been able to do the same for Syedna Buhanuddin and his Mumineen.

Husain Qutbuddin lists many Mawazeen Kiraam AQ as having served their Moula with distinction. Many of them were the Mansoos as well and went on to become Doat, while some remained at the post of Mazoon. In all instances, one factor unites them all. They all offered exemplary devotion and leadership in the period of the dai that they were mazoon to. They did not just talk about fitnat after its time was over. Under trying circumstances, they refused to leave their Moula’s side, and attempted to protect their moula and Dawat from those that would sow discord and sedition. They were ever-present when their khidmat was most required. For example:

There is a common factor uniting all these examples that Husain Qutbuddin offers. They all were offered to the Moula that they served as Mazoon for, during the period of his tenure as al-Dai al-Mutlaq, when their services were most called for. This then begs the question: what services were rendered by Khuzaima Qutbuddin to his Moula when, as Husain Qutbuddin repeatedly likes to assert, Moula was supposedly embroiled in different aspects of fitnat? (Refer to: Reason #42)

According to the Qutbuddin clan, Syedna Mohammed Burhanuddin RA for most of his tenure was:

History, as Husain points out, has taught to expect most exemplary service from the Mazoon when his Dai was subject to violations and attack. One supposes that the window of opportunity to serve should have been capaitalised on by Khuzaima before the demise of Moula, rather than just talking about it after his death. If what Khuzaima Qutbuddin says is true about this fitnat occurring for decades then he should have been at his Moula’s side doing his best to negate and neutralize it. The ultimate example of khidmat for one’s Moula has been immortalised by Ameerul Mumineen’s SA azeem khidmat and tafaadi for Rasoolullah SA during the battle of Uhad, where though Rasoolullah released him of his obligation, Ameerul Mumineen showed the world what it meant to serve and submit to your Moula, without ever leaving his side, without care for personal safety. What was Khuzaima waiting for?

Khuzaima Qutbuddin should have embellished his name in the history books by quelling wave after wave of this supposed fitnat and allowing his Moula to remain free from worry. He should have been at his Moula’s side doing the best to dispel such unwanted elements from the Dai’s midst. He should have been struggling for his Dai’s wazarat, ensuring that no practices are authorised against his Moula’s wishes. After all, history has shown us that a Mazoon gives no quarter when it comes to defending his Moula.

If he says that he was acquiescing to his Moula’s wishes and not making his opposition public, he could have at the very least stayed at his Moula’s side everywhere he went, offering moral support and solace during this testing time. A devoted Mazoon would consider it his duty to be at his Moula’s side especially when this supposed fitnat was brewing at close quarters to him. It would be hard to claim that Syedna Burhanuddin did not want his devoted Mazoon to be at his side. This devotion could have been shown when Syedna Burhanuddin was in London in 1432 H, or when under impossible circumstances, he returned to Mumbai for his esteemed father’s urus mubarak, and not run away at that instant. A devoted Mazoon would surely not have excuse to leave his Moula’s side, especially when returning in bad health, for their mutual father’s urus mubarak. If excuses could be found for these instances, what about the the last two decades of meeqat’s and travels missed, where stacks of photographs portray the empty space next to Syedna Burhanuddin’s takht or gaadi mubarak.

It is not comprehensible that Khuzaima Qutbuddin was constantly staying away from his Moula, for the better part of two decades when there was a supposed fitnat going on, for Moula’s benefit. A devoted Mazoon who loved his Moula, in an age when travel was easy, would not do so. This is the least that could be done, for it might be argued that a devoted Mazoon should be doing much more to bring Mumineen closer to their Dai, a responsibility of the Mazoon in zuhoor and satr, than just staying by his side in physicality and spirit.

This responsibility was being borne by Syedna Mufaddal Saifuddin for decades. His every action brought Mumineen closer to their Moula. Arguably, even the easiest of these responsibilities were too taxing for Khuzaima Qutbuddin. So, as we see, the examples of all the Mawazeen that his son mentions reflect poorly on him, instead of aiding his cause. Husain Qutbuddin likes to remind us of how Syedna Burhanuddin has extolled the virtues of the rutba of Mazoon. It is true that Syedna Burhanuddin said that that a Mazoon is a Dai’s right hand, and is expected to aid him in administering the Dawat of Fatema. However, instead of accolades to be proud of, they were chastisements to Khuzaima for not living up to these attributes. What use is a right hand that is as good as non-existent or never around when you need it? Unlike Khuzaima, not one of the mawaazeen kiraam in Husain’s examples, waited till their Moula has passed away and then reflected on a supposed fitnat with idle talk; they all acted when the actual fitnat was going on, when their words and actions made a difference, not when nothing could be done at all. So by all accounts he failed his Moula if there was a fitnat going on in reality. If on the other hand, there wasn’t any fitnat, well, that doesn’t portray him in good light either.

The truth in fact does set us free.

If we continue with how the examples of exemplary service of past Mawaazeen bear poor reflection on Khuzaima Qutbuddin, we see that he lacks in one essential quality which all of them had an abundance of; submission and humility for their Dai al-Zamaan. Khuzaima Qutbuddin prides in himself in citing couplings in Dawat theology and doctrine where the Dai and Mazoon are coupled together. It is also true for each coupling that the superior entity among each coupling (i.e. the Dai) is alike the sky while the lesser entity (the Mazoon) is akin to the earth. Mawazeen Kiraam remembered this difference very well and took great pains to show the vast distance which exists between both stations. Unlike Khuzaima Qutbuddin, they would not try to establish proximity or similitude, favouring instead a humble demeanour to the extent that they would deem themselves devoted servants to their Moula and Dai, rather than espouse their proximity of station to him.

In his letters addressed to the 47th al-Dai al-Mutlaq, Syedna Abdulqadir Najmuddin RA, Syedi Hebatullah Jamaluddin AQ, though his mazoon would portray a vision of humility, supported by his actions. He would beseech his Moula saying that I am your humble servant, your slave, I approach you bowed in prostration. You are my aqa, my moula, my saviour, my mentor, my guide; one who has no equal. Syedi Jamaluddin AQ demonstrated his intent, his humility, his heartfelt veneration and, most importantly, his actions did not contradict his words.

It is well known that Khuzaima would try and mirror every imami gesture and action that Syedna Burhanuddin would make, and lay claim to privileges meant for the Dai al-Zaman. Even if by some distorted right, he would lay claim to the same, would not his love, veneration and devotion for his Moula steer him away from this course: a course that caused unease, unrest and needless controversy within Dawat. He would give salami, accept talaqqi, demand pankha; actions suited to the hadrat imammiyah of Syedna Burhanuddin. The act of demanding Syedna Burhanuddin’s privileges or mirroring his gestures was indication of Qutbuddin as Mazoon wanting to be just like or almost like the Dai al-Zaman Syedna Mohammed Burhanuddin. He saw himself alike a Dai when there was another Dai present, thinking the difference between both positions to be negligible at best. Most privileges (accorded to Moula) were, it must be noted, not offered to him in a forthcoming manner, unless he or his entourage badgered people to comply. Even if Khuzaima is given the benefit of the doubt, and thought to be only acting out of respect for the station of Mazoon, it was poor choice on his part because displaying humility and earning respect would have stood him far better than demanding it, and achieved greater inroads in people’s hearts regarding the sanctity of the station of Mazoon. The lay man just looked at him and thought that he is too eager to be Moula, instead of being eager to serve him devotedly. Through gestures, mannerism and choices, his intent was obvious to any observer. 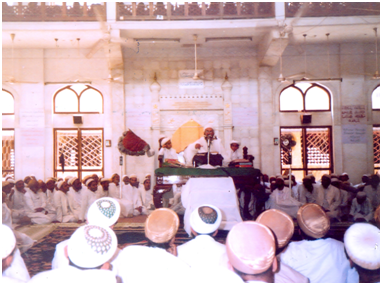 One only has to observe Khuzaima’s polar opposite Syedna Burhanuddin’s mansoos, Syedna Mufaddal Saifuddin abstaining from privileges due to him in favour of not resembling Moula. Even though people were eager to accord Syedna Saifuddin with every privilege after nass, the extent to which Syedna Mufaddal Saifuddin was careful not to mirror Syedna Burhanuddin could be seen in many instances, both prior to nass and after it as well. For example, when Syedna Burhanuddin draped a shawl over his shoulders, and Syedna Saifuddin was in his presence, he would in most instances if not all, be careful to drape his shawl over only one shoulder. It would not have been untoward to drape a shawl as people normally do, but this poignant gesture and concern conveys the veneration he had and continues to have for his Moula RA, and is reflective of the submission and humility a true mansoos would hold for his predecessor.

As with everything else, actions do speak louder than words. 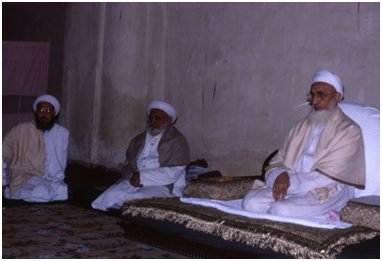 (Syedna Mufaddal Saifuddin draping his shawl over only one shoulder.)

Since there is no parallel to Syedna Mufaddal Saifuddin TUS in his humility, the Qutbuddin clan have to come up with weak arguments finding fault with even that. Only if you would consider haughtiness or constantly wining about decorum and protocol a virtue, would you consider sincere humility a fault.