This article is in response to the judgmental comments passed in an article about Syedna Mohammed Burhanuddin’s RA health, by two doctors in the field of neurology, namely:

These experts are currently practicing in Michigan and Ohio, USA (in close proximity to where Tahera, Taher, and Taiyeba live). It is clear that neither of them were treating Syedna Mohammed Burhanuddin RA as he was in London and they were 4,000 miles away in the U.S. Their comments are most likely based on reports given to them by the Qutbuddins. In brief, they have claimed that after suffering a debilitating stroke, medically, Syedna Burhanuddin RA could not have spoken coherently and performed nass, nor could he have drunk the sherbet that was presented to him in the hospital.

I am not a doctor, but common sense tells me that although the field of medicine has advanced in the last several years it is far from diagnosing every medical situation universally. It is common practice that doctors are able to diagnose certain patients based on tests and results provided by other doctors, but in complicated matters, the creme of doctors would hesitate to pass any judgements unless they have physically examined the patient. How then is it possible for a doctor to pass comments on a patient he hasn’t seen or examined, let alone witness his spirituality (if indeed the Qutbuddins accept Syedna Mohammed Burhanuddin as a spiritual personality). How can anyone in the right mind blindly accept these statements or any reputable newspaper report them without any actual verification?

I do not doubt the expertise of these doctors sought out by the Qutbuddin family. I only wish to highlight that the doctors might not have been aware of the importance of the incident they were commenting on or the age-old traditions and customs surrounding it. These doctors have only commented based on the material presented to them by those who have approached them from the Qutbuddin family and their supporters.

As a Dawoodi Bohra and practicing member of the faith, I wonder on how informed the doctors were of the history of Dawat and the importance of nass. Their experience with Syedna Mohammed Burhanuddin RA was next to none and I am not aware of their understanding of basic Dawoodi Bohra customs  (like the consumption of sherbet). No matter how advanced their comprehension may be in medicine, understandably, they would surely be less knowledgeable when it comes to these religious matters.

Firstly, these respected doctors would not be aware of the importance of nass. According to Dawoodi Bohra theology, belief, and practice it is the greatest and most important task charged upon every Nabi, Imam and Dai. Only once nass is performed may each saheb ‘rest in peace.’ It is a tenet of our faith. The Duat Mutlaqeen swore to the Imam that no Dai would leave this world without passing on the amanat of nass to his mansoos for the salvation and najaat of mumineen. Come what may, each Imam has appointed their mansoos. Rasulullah SAW declared Moulana Ali AS his mansoos even though it meant that it would endanger his life.

Syedna Taher Saifuddin RA has stated that the 49th Dai declared his nass on Syedna Abdullah Badruddin RA, at a time of illness when no other (ordinary) man could speak coherently.

The nass has, was, and will be always declared ‘as if life depended on it’. For indeed, life does depend on it, all our lives.

Secondly, I am unsure that these respected doctors have not been shown the video nor images of Syedna Mohammed Burhanuddin RA in Raudat Tahera on the 19th of Rajab 1432H, only a mere two weeks after this stroke. I wonder why no one chose to comment on this. The Fatemi Dawat website has alleged that Syedna Mohammed Burhanuddin RA, due to his stroke, was not medically fit to pronounce nass on Syedna Mufaddal Saifuddin TUS that day. I wonder why the Qutbuddins didn’t ask the doctors to comment on the events which took place this day? The actions of Syedna Mohammed Burhanuddin RA that day are not that of an ordinary person who had suffered a stroke. After a flight from London to Mumbai, we witnessed Syedna al Muqaddas RA enter Raudat Tahera on a palkhi and give salaami to mumineen exactly like he always would. 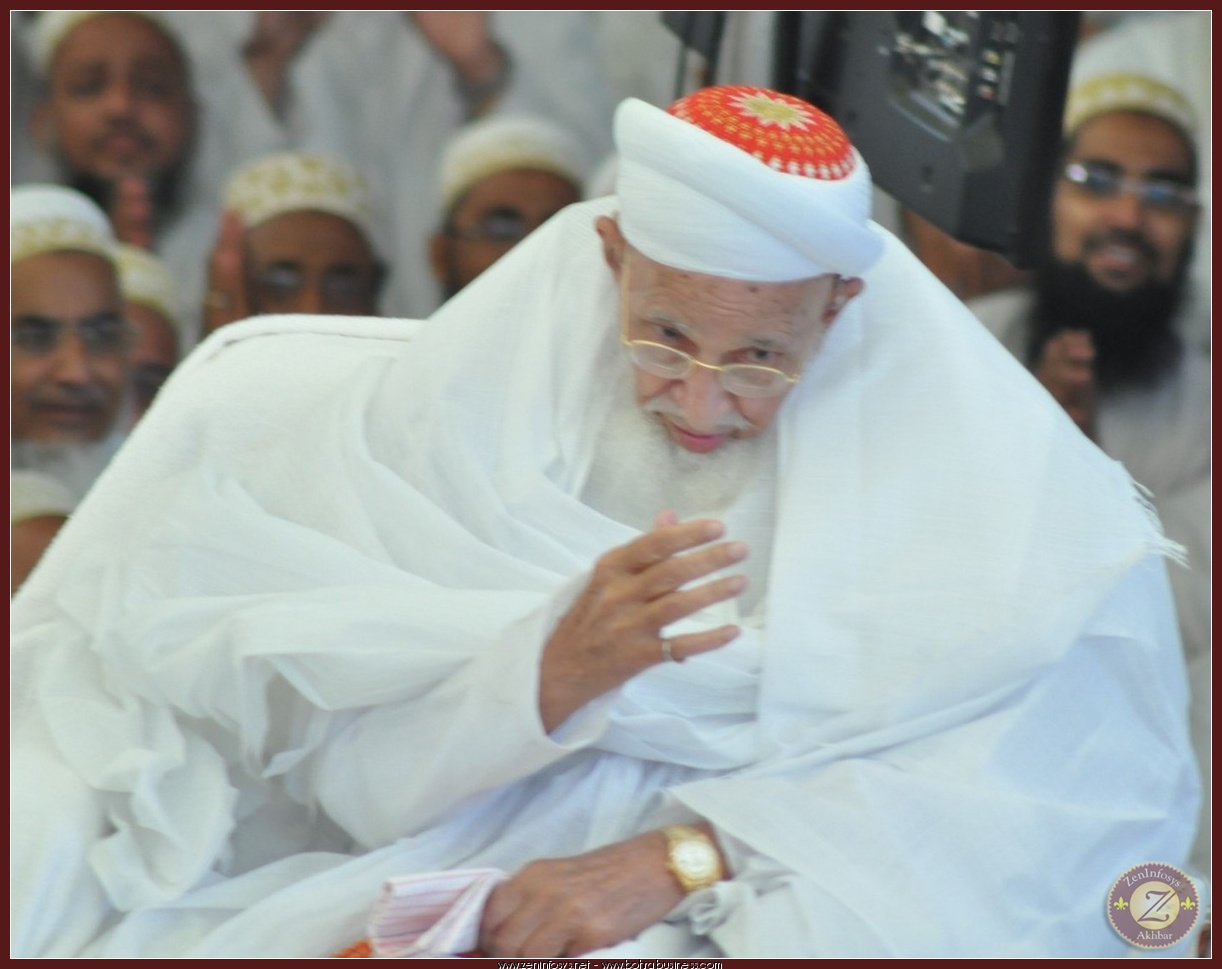 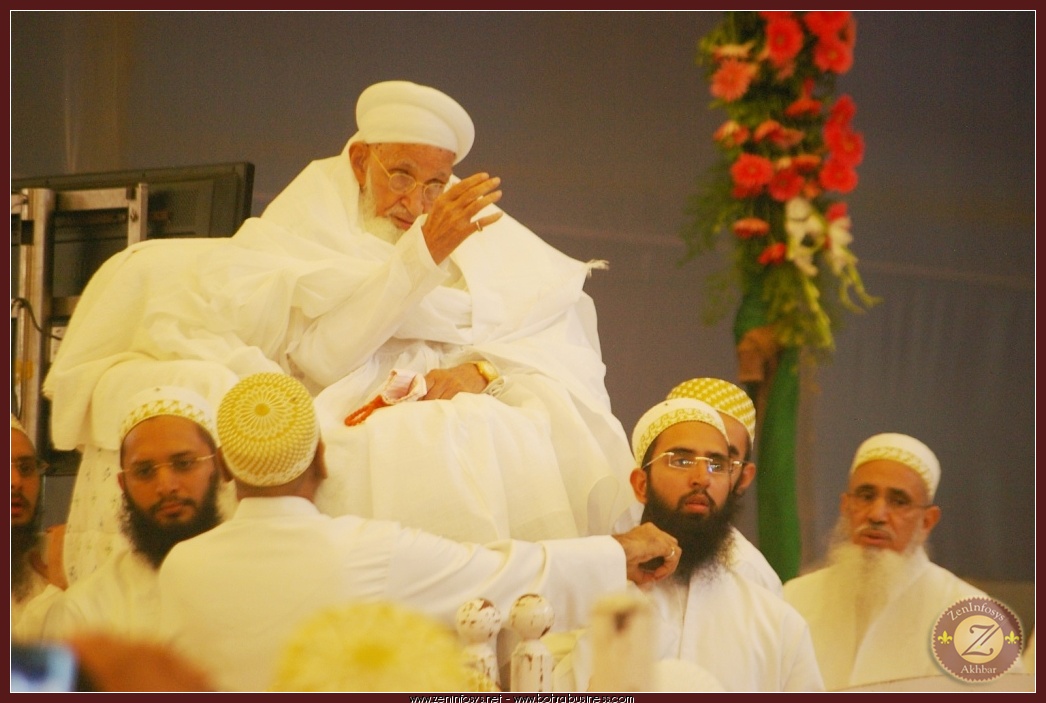 Then we witnessed Syedna Mohammed Burhanuddin RA, despite his stroke, sit on the ground as in namaaz, perform ziyarat, and walk around the qabr of Syedna Taher Saifuddin RA. 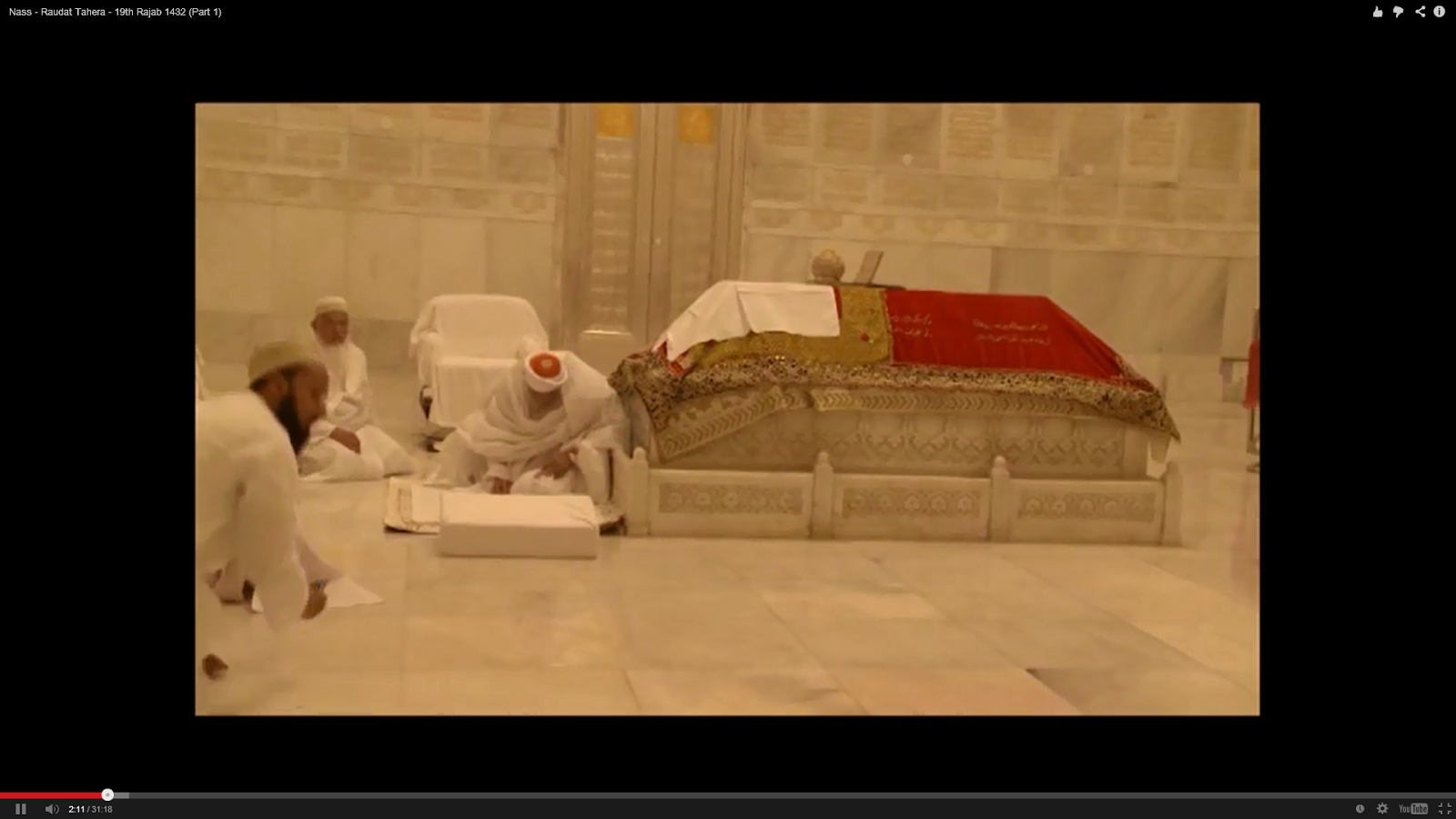 Syedna RA seated on the ground besides the qabr mubarak. 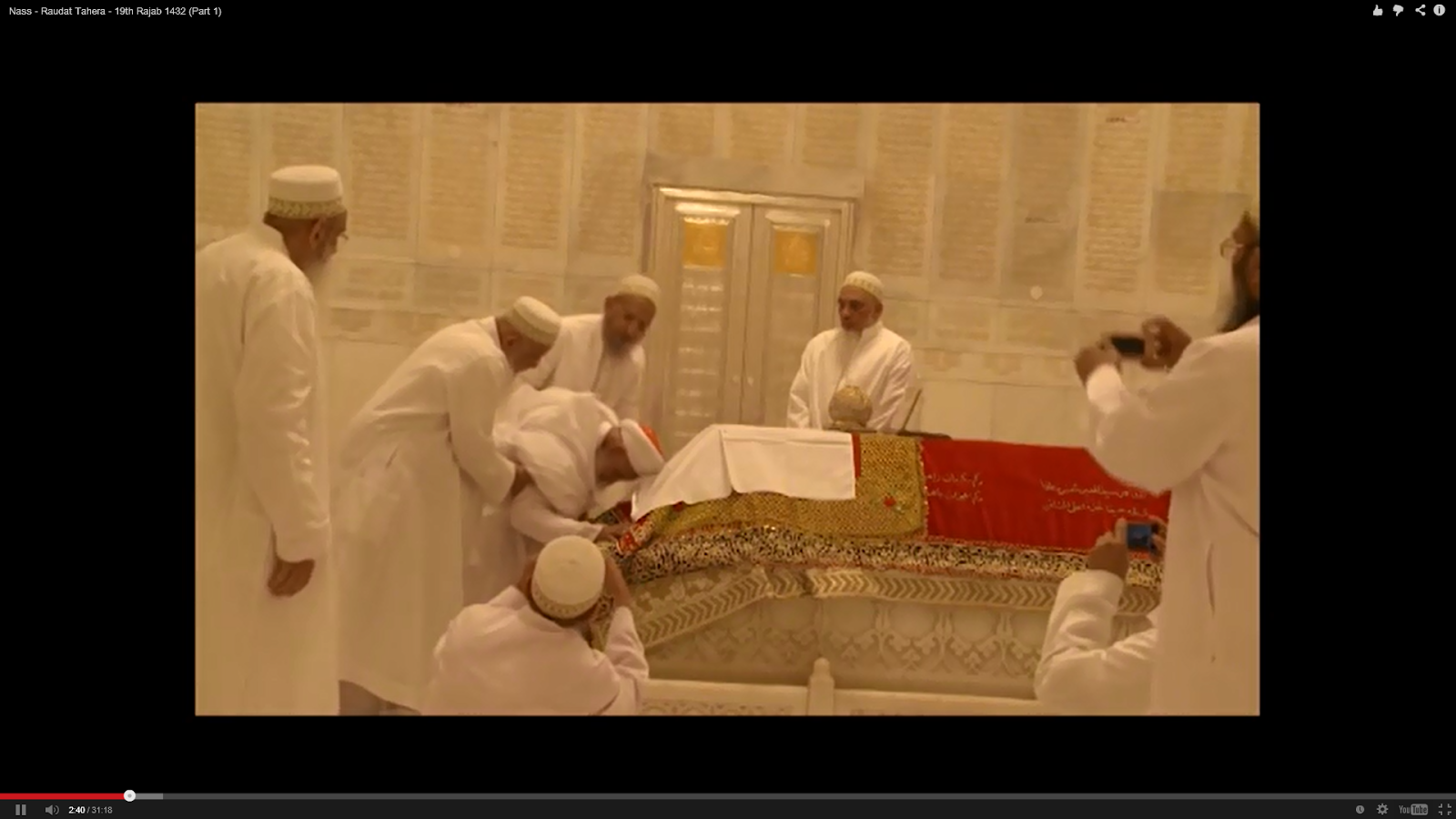 Syedna RA performing ziyarat as he always did. 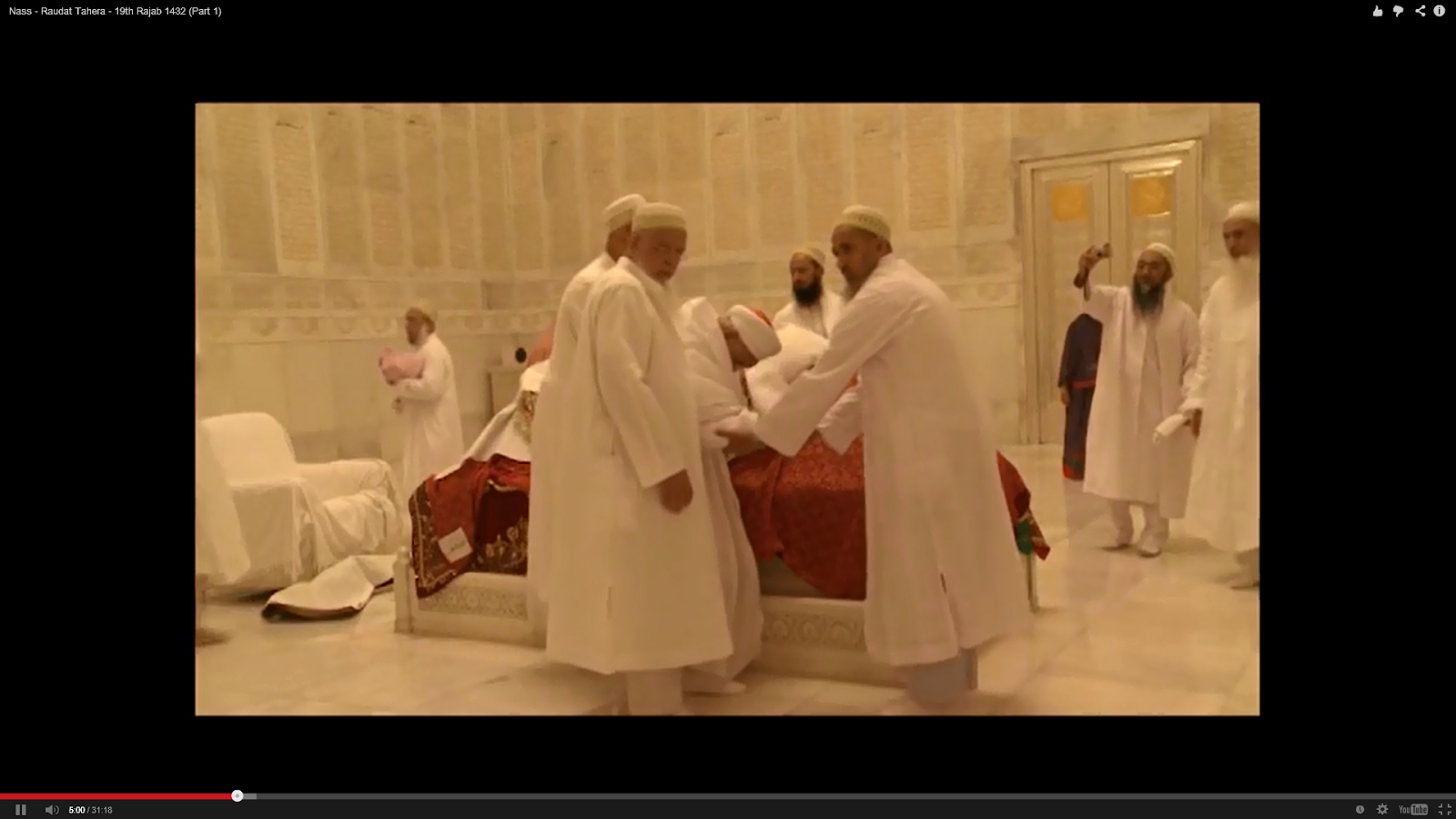 We then witnessed Moulana Mohammed Burhanuddin RA acknowledging Syedna Mufaddal Saifuddin TUS in front of him, giving him raza to proceed, calling him closer, holding the mic and speaking and finally accepting the najwa from Syedi Mukasir Saheb DM. 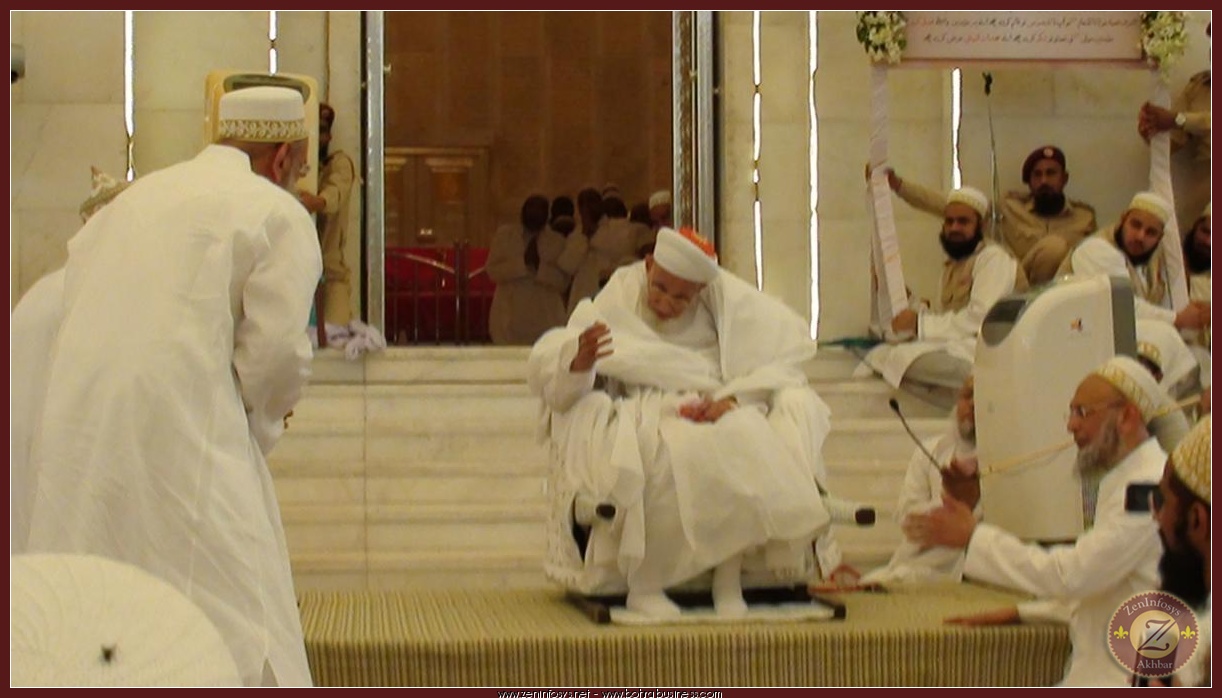 Syedna RA clearly giving raza to Syedna Mufaddal TUS without any aid and instructing him to proceed. 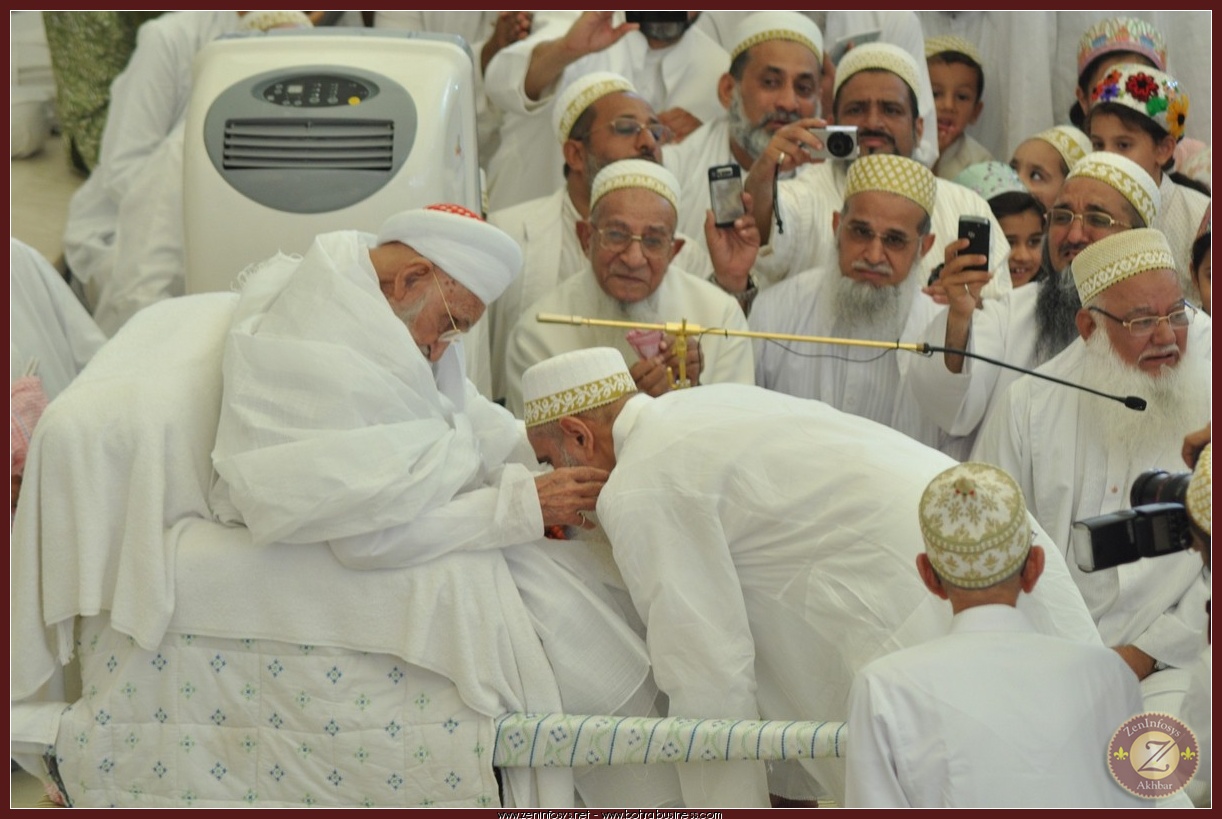 Syedna RA bending over to speak to Syedna Mufaddal TUS with his hands on his back. Sh Abdulhusain Yamani, one of the Nass witnesses looks on overjoyed & with keen interest.

Syedna RA holding the mic with his hands and performing Nass.

In the video at exactly (26:53 to 26:57) Syedna Mohammed Burhanuddin says “Mufaddal Bhai ne Nass nu Taaj“. We can also clearly hear Moula RA stating “Khuda Barakat Aape” (32.40 – 32.43). (this is from the video posted on the Fatemi Dawat website originally).

All of this, which have witnessed, I believe refutes their following statement that “Syedna was too ill to speak coherently“. Furthermore, if these doctors were present during the first waaz on the 2nd of Moharram 1433H Hijri in Mumbai, they would have heard the short bayaan/waaz of Syedna Mohammed Burhanuddin RA, where many words of the shahaadat were crystal clear, especially the final closing sentence of و اخر دعوانا ان الحمد لله رب العالمين. I was present at both occasions, and I am proud to bear witness of what I heard.

Thirdly, regarding the sherbet.

“It would have been impossible for His Holiness to have drunk sherbet the night of June 4… he was documented to not be even able to initiate swallowing… and to be continuously completely unsafe for any oral intake.”

The rasm of drinking sherbet is to mark a moment of happiness; in this case it was the public announcement of Syedna’s successor, Syedna Mufaddal Saifuddin TUS.

These moments of joy can be expressed by drinking sherbet or tasting sweets called saakar. The sherbet is usually drunk in tiny sips (sometimes almost the size of a drop), and saakar ranges from granules of sugar to chocolates or sweets. In this case, it is noted that Syedna was offered sherbet.

The Qutbuddins obviously don’t know the specifics of the situation in the hospital because simply they weren’t there. Were the doctors aware that the consumption of sherbet in Dawoodi Bohra customs doesn’t mean that an entire glass of liquid is gulped down. That action possibly could have resulted in difficulty of swallowing. Even if the most tiniest drop was offered to Syedna Burhanuddin RA, it would be considered the drinking of sherbet for a joyous occasion.

I am not aware of the quantity of of sherbet that was offered to Syedna al Muqaddas RA, but neither are they, so it is best not to pass judgements on blind assumptions. Any professional, let alone a respected doctor, would agree.

The evidence is clear. For anyone who yet doubts, I would request them to read Reason #5 Analysis of Nass Video on Khuzaima Qutbuddin’s Website. and watch the video again.

Syedna Mohammed Burhanuddin RA and Syedna Mufaddal TUS are our spiritual doctors. May their nazaraat heal the hearts of every mumin who wants to believe the truth. Ameen